Do you believe in ghosts? I’m talking about the folks in our culture who “collaborate” in creating some of the largest art and entertainment brands known in the world today. On the heels of the Meek Mill and Drake ghostwriting feud, I was introduced to another quarrel, this time in the contemporary art world, between well-known street artist ALEC Monopoly and lesser-known (to me at least) illustrator Mike Mozart.

While interviewing both parties and hearing convincing arguments from both sides, I noticed a couple of keywords that seemed to come up very often and wanted to distinguish the difference between them. These words are “Collaborate” and “Work For Hire”. Collaborate, is defined as “working jointly on an activity, especially to produce or create something” and Work for Hire is explained as “work created on behalf of a client where all parties agree in writing to the Work For Hire designation”. Keep these two words in mind as you read this story.

ALEC Monopoly has created one of the most globally recognizable art brands today. By incorporating his personality with the face of “Mr. Monopoly”, a character created by Dan Fox and made famous by the “Parker Brothers” brand, ALEC has managed to tackle current events and convey messages through paint that has collectors salivating about owning a piece of his work. As a “Celebrity Artist”, ALEC polarizes his fans with his persona of opulent living, countless high-profile clients, and his signature top hat and facemask concealing his identity.

Mike Mozart, An illustrator for over 30 years, specializes in creating some of the most recognizable kid characters for many corporations. Has been published in over 100 kids’ books and was also one of the first live YouTube broadcasters from “Occupy Wall Street” rallies in New York City. Mike gained prominence through his Jeepers Media brand and his channel titled “TheToyChannel”, but not too many folks (at least those I have spoken with) have ever heard of the artist “MiMo” which is Mike’s moniker as a graffiti/street artist.

“It is important to note that Alec Monopoly began incorporating the Monopoly Man character into his work in 2008. By the time he met Mike Mozart several years later, he had already held a sold-out solo exhibition in NYC, been arrested for doing illegal graffiti, and placed his iconic “ALEC” logo and Monopoly Man characters on walls around the world,” adds Andon.

Mozart remembers the day he met ALEC at a video production studio in Beverly Hills. He had no idea that ALEC would be there, and at that time, had never heard of the then-emerging street artist. He went on to share some of his drawings with ALEC and says he (ALEC) was very enamored with him. “He was very excited to meet me, he even bought some art/drawing supplies from me,” Mozart adds, acknowledging that ALEC was working on art during this visit. This encounter led to what is believed to be a working relationship and friendship of almost 4 years between the two artists in which Mozart states he even inspired the naming of ALEC’s dog, “Bruisa”, indicating how close the two became like friends.

What gets tricky is whether further business between the artists was understood by both parties as a “collaboration” or “work for hire”. “Mike clearly presented himself as a professional Illustrator during our entire relationship with him and we were paying him under that pretense,” Andon adds.

Mozart has revealed that he has worked on hundreds of projects in “collaboration” with ALEC Monopoly, varying in theme and that some of the original drawings given to ALEC in that first meeting helped brand and skyrocket his artist persona. He says, the “Monopoly Man on a Cross”, one of ALEC’s most notable pieces (pictured below), was among that earlier bunch of drawings given to ALEC. He also sent us a link to a folder containing hundreds of drawings and ideas that were the inspiration for tons of other ALEC Monopoly pieces.

However, ALEC Monopoly’s manager, Avery Andon contends that “Mike has never painted or touched a single one of Alec’s original canvas paintings, nor were his sketches EVER sold as originals to clients. Mike clearly presented himself as a professional Illustrator during our entire relationship with him and we were paying him under that pretense.”

That’s where it seems to get pretty ugly. Mozart informed us that for the first two years of the “collaboration” with ALEC, he was NOT paid for his services, nor did he ever sign any agreements of Work-for-Hire, and was never considered a “Team Member” of the Monopoly camp.  Monopoly’s camp says that Mozart was paid for his illustration services and “any claim that he believed he was a “collaborator” or partner in the Alec Monopoly project is also completely false.” Both parties claim to have proof that supports their argument.

“I never said anything bad or negative pertaining to ALEC or tracing or projecting,” adds Mozart. The Monopoly camp thinks this is Mozart’s attempt at gaining fame and notoriety with his “Smear Campaign” on ALEC Monopoly as they claim they have made multiple attempts to resolve the issue amicably. Instead, they say he started by sending “aggressive and hateful emails” about Alec to galleries they’re associated with and that he “never once vocalized his discontent or requested additional credit or compensation from us throughout the entire period of time that he was working for us”.

Mozart slams this as being untrue noting that he has never said anything to discredit ALEC Monopoly as an artist or brand. “I never said anything bad or negative pertaining to ALEC Monopoly,” adds Mozart. “I have ONLY ever mentioned that we have “collaborated”. Mozart recently attended the “Forever 21” launch event that ALEC was the featured artist of and is in “collaboration” with for a new line of Monopoly themed clothing, and even posed for a picture with his now nemesis wearing what seems to be a “collaboration” of “MiMo” and ALEC Monopoly.

After that photo, almost every one of Mozart’s posts mentions that he “collaborated” with Monopoly and hints that he is the man behind the creative direction of the artist’s brand.

“Dating back to Michelangelo, Rembrandt and Rubens to Andy Warhol’s famed “Factory” and most recently top-selling artists like Jeff Koons and Damien Hirst, artists have enlisted the help of creative professionals and staff members to help keep up with demand and scalability,” Andon says.

ALEC’s camp has never denied any involvement with Mike Mozart but also argues that it was a “good marketing plan” that helped ALEC Monopoly become a household name, not one single image. “Collectors are buying into Alec’s persona, mystique, and star power. His unique style and personality, and pension for flair have propelled him into the international spotlight,” states Andon. He also reminds readers that “the content in question is the appropriation of characters that neither Mike Mozart nor Alec Monopoly created” stating that public usage of the characters is fair game. They believe that Mike’s campaign will hold no relevance to the collectability or growth of ALEC as an artist.

Mozart believes that once the truth comes out fans will ultimately understand that it was he, not ALEC, that was the “creative force” behind much of the artwork. “I don’t want money, I’m not going to sue. I have a substantial amount of time invested and I have earned that recognition!” BM.

The Art Influencer by ArtAboveReality

The art world is changing. Art has always been a driving force in community enrichment, creating social awareness and enhancing the juxtaposition of our society and the artists canvas. Today, the art works have grown in scale and complexity to intrigue new audiences and revive the collective appreciation of art in general. These folks don’t just create, they inspire.. We call these folks The Art Influencers… 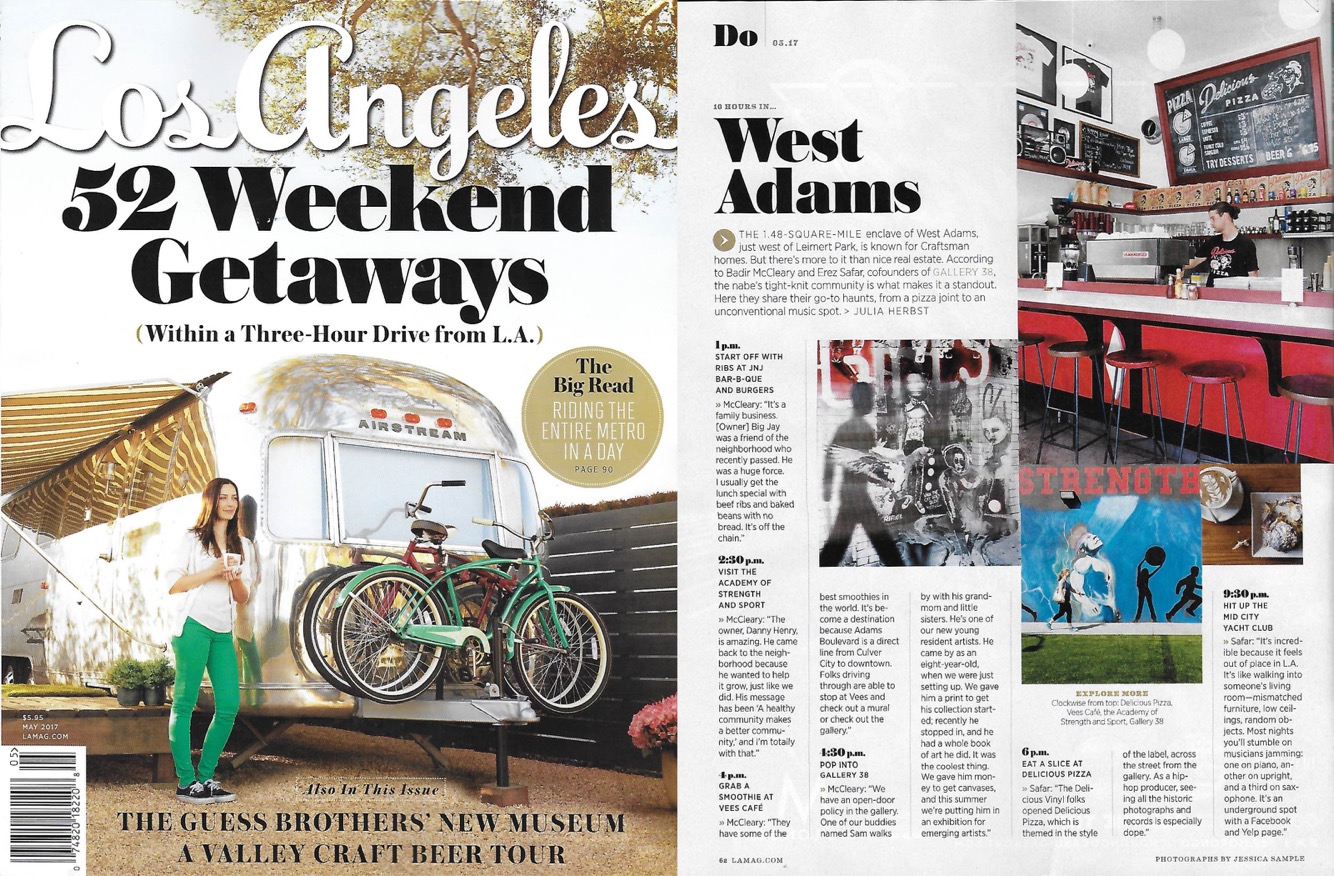 Gallery 38 an ongoing project by ArtAboveReality and Bancs Media, opened its doors in March of 2015 embarking on the West Adams community with a goal of resurrecting the neighborhood’s past history of visual culture and adding to the renaissance of art booming in the Los Angeles area. With time and painting, our vision with the help of our artists and the community we’ve been able to transform and breathe artistic creation back into a sector of the city needing resurgence. Named in a LA Weekly article as “The Center of the burgeoning West Adams Art Scene”, Gallery 38 has done over 20 solo exhibitions, 2 global art fairs, and have invited other emerging artists to join in by offering the gallery as a part-time studio and event space, thus creating a community of creativity.

With a community-based approach, Gallery 38 has been able to continue the tradition of presenting emerging and established artists while focusing on developing the community around them. Within the two years, the community has seen an eclectic interest in the aesthetics of the neighborhood showcasing a wide range of visual art from murals to academic exhibitions and panels in the community. The unique artists that light up the gallery and neighborhood, differ in concentration, composition, and social status, but are brought together by their unifying element of mixing mediums and thought-provoking imagery. Gallery 38 will continue to be a pioneer in bringing appreciation, education, and artistic freedom while displaying jaw-dropping exhibits and impermanent installations throughout the global arts community. 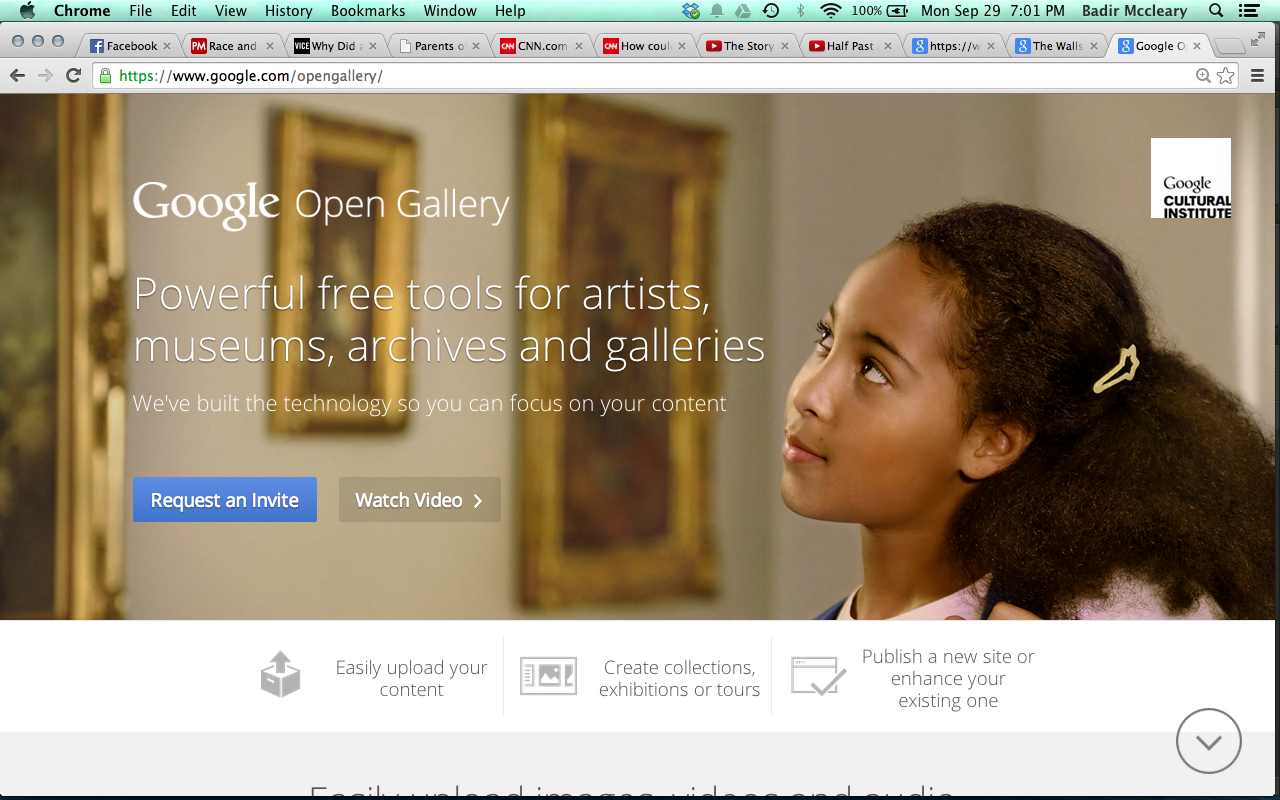 We were so excited to be one of the first users of the Google Open Gallery platform that looked to feature creatives and institutions alike in a digital setting, to further the education of arts in the public and museums. We created our first exhibition, which featured up-and-coming and established artists focused on storytelling from inside their studios or around their local neighborhood walls.