Agesander1 An Athlete Wrestling A Python (1877)1 and Polydoros of Rhodes1 Art51 ArtAboveReality53 artist38 Athenodoros1 Belvedere Torso1 British Sculpture1 Colin Kaepernick2 CTE1 Frederic Lord Leighton1 greek sculpture1 Hercules Wrestling with the Death for the Body of Alcestis1 Johann Joachim Winkelmann1 Laocoön and His Sons1 London3 maquettes1 NFL1 Royal Academy1 Sculpture8 Tate Britain1 The Daphnephoria1 Thomas Brock1
“When I was at work upon the Daphnephoria it occurred to me to model some of the figures. It was at this time that...

“When I was at work upon the Daphnephoria it occurred to me to model some of the figures. It was at this time that the idea of my Athlete Struggling with a Python came into my mind, and so I modelled this figure.” – Frederick Lord Leighton

I walked into the galleries of the 1860’s in Tate Britain and stumbled across a work by Frederic Leighton titled “An Athlete Wrestling A Python” (1877). Frederick Leighton, known as the pioneer of “New Sculpture” in England with his new view of sculpting the human body and the complex movements and activities of the anatomy. It was said that his style of sculpting had a “liberating effect” on the way the next generation approached painting and sculpting.

His work contained a subjects referencing historical, biblical and classical matter with Michelangelo and the Belvedere Torso as a guide for creating a new way to study human form. The aforementioned piece was an important piece in history in the way the Leighton used classism and exploration of greek sculpture to create an idealization of the body. It was said by earlier scholars that the work presented a “moral dimension”, with the python being represented as evil but also being a creation in nature.

Frederic Lord Leighton – An Athlete Wrestling with a Python (1877)

Taking lead from sketches of a commission in 1874 titled “The Daphnephoria”, Leighton modeled maquettes (statues) for several of the figures to be featured in the painting and had the idea of the sculpture during the study. Another painting of his, “Hercules Wrestling with the Death for the Body of Alcestis” allowed him to consider the anatomical complexities and excellence of the nude male. How ironic right? With the current protest by Colin Kaepernick and other athletes on the National Anthem of the United States of America, the proverbial “venom” spewed by the media, fans and even the President Donald Trump, has placed the black athlete in a wrestling match between his/her career and their dignity. It was extremely ironic to see this piece on the day with the aforementioned “President” told owners to “Get these son of a bitches off the field” in a rally in Alabama today.

The athletic body is history was used to connected to representation of the health of a nation. In comparing that to the case presented in America, it’s almost a tall tale of the American sentiment of the athlete against the state, in this case the NFL and diseases that have plagued retired players such as the most recent findings of CTE in the brain. Like Colin Kaepernick, the athlete seems sure and confident in his decision to take on the snake and Leighton does an amazing job (along with his assistant Thomas Brock) of showing the vulnerability and weakness of the animal, with the snake visibly being hurt or suffocated. 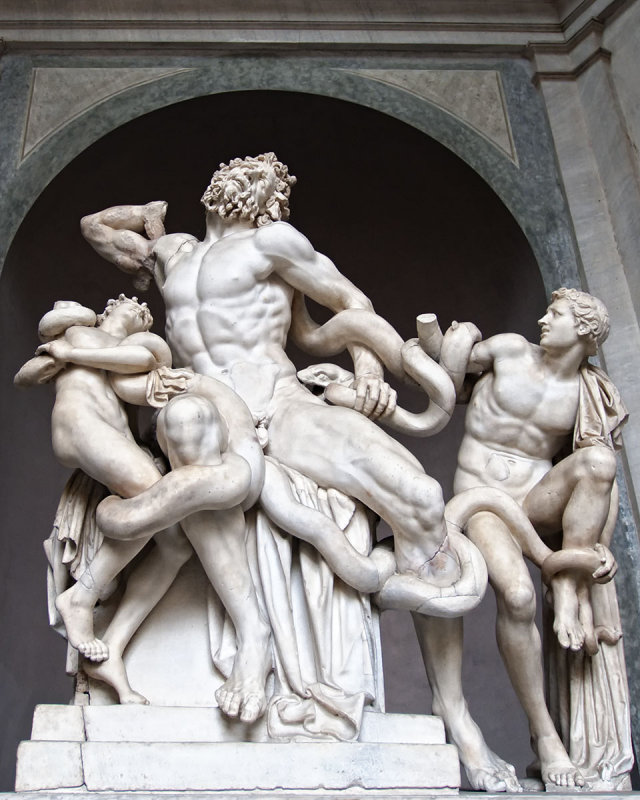 Laocoön and His Sons

I feel that the way the athlete and the animal are locked in a stare down is a key factor in this piece almost assuming that this match was an inevitable one, insisting that every athlete has its own demons to conquer in road to his/her progress. It can also be said for a biblical reference of Adam battling the snake that tricked Eve with the eating of the apple in the garden of good and evil according to christianity and its texts. The piece is also seen as a challenge to an earlier work by Agesander, Athenodoros, and Polydoros of Rhodes titled “The Laocoon” where it shows the priest and his sons being attacked by sea serpents. Displaying “the prototypical icon of human agony”, this sculpture shows the trio completely overtaken and is said to display suffering with no redemptive reward.

Johann Joachim Winkelmann wrote about the “paradox of admiring beauty while seeing a scene of death or failure” and in this work the anticipation of a potential deadly blow by the snake or the athlete, leave the viewer struck with wonder about the result. When this piece was exhibited at the Royal Academy in 1877, it was heralded as “arguably the most influential piece of English sculpture the 19th century” and the original plaster was given to the Royal Academy by the artist in 1886. 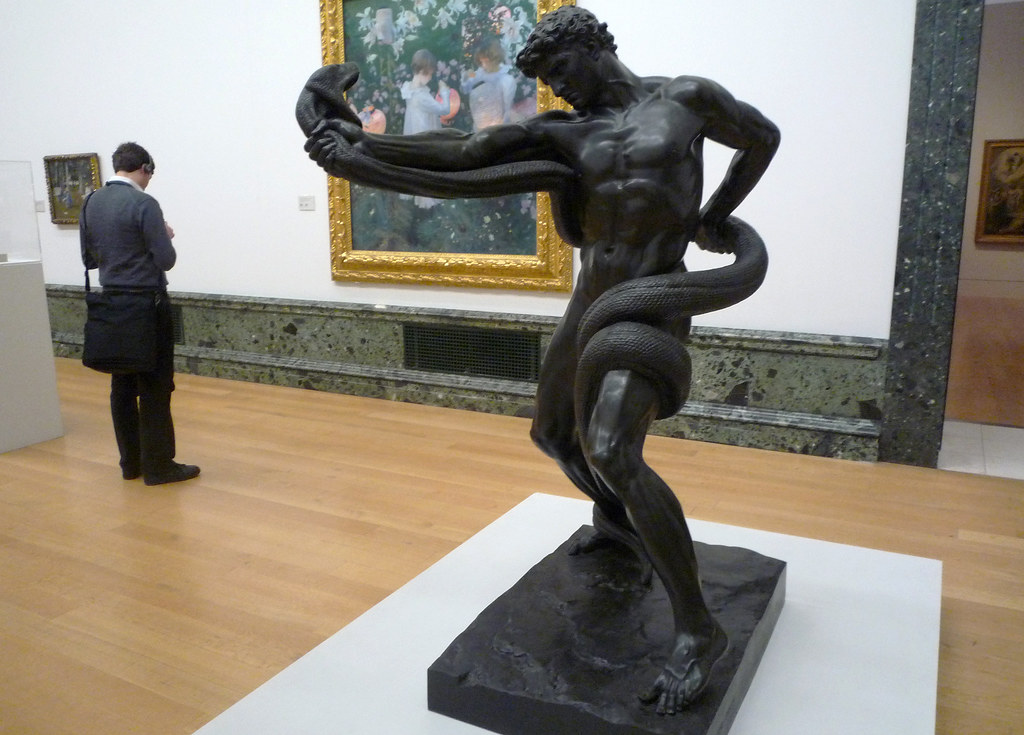 Frederic Lord Leighton – An Athlete Wrestling with a Python (1877)

Still don’t believe history repeats itself through our arts? Look around you. Pay attention. It’s really important to understand how the arts play a part in today’s current events. I don’t believe that anything is a coincidence, I was thinking heavily about what it must mean to be a black athlete in America and the moral rectitude that Kaepernick and others have chosen to display and this piece stood out as soon as I entered the gallery. In conclusion, this sculpture presents a ton of questions that could be answered depending on the viewer’s personal views. Who’s the victim and the victor? Is the athlete evil for trying to tame nature? Or has he a grip on what would be his demise and wrestling it out of his future? You be the judge.

Badir McCleary is an independent consultant. He holds a M.A. in Arts Business from Sotheby’s Institute of Art (Los Angeles/London) where he focused on creating art markets and with an undergraduate degree in Internet Computing from Cabrini University focusing on e-commerce and digital trends. Badir enjoys working with artists and consider them crucial to informing his practice.

No comments so far.